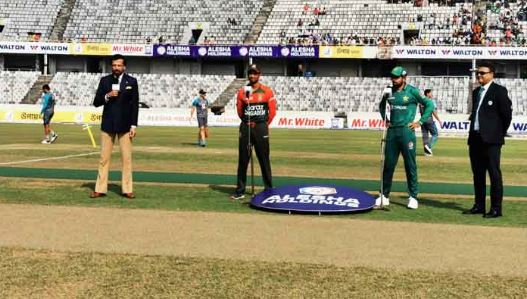 The hosts’ batting line-up struggled against a powerful Pakistani bowling attack, scoring only 108/7 from their 20 overs.

Bangladesh’s Najmul Hossain Shanto scored the most runs for the squad, with 40 off 34 deliveries.

Shaheen Afridi and Shadab Khan each got two wickets to keep the hosts at bay, while Nawaz, Haris Rauf, and Wasim each grabbed one wicket.

Pakistan’s left-arm bowler Shaheen Afridi came out strong once more, dismissing Bangladesh opener Saif Hassan in the opening over to put the hosts on the back foot.

First over Shaheen is back! 🔥#BANvPAK

As the two teams prepare to face off in the second T20I of the three-match series, Pakistan lost the toss on Saturday and were put in to bat by Bangladesh.

Pakistan will be looking to win the three-match T20 tournament against Bangladesh today at the Shere Bangla Stadium in Dhaka, where they are currently 1-0 ahead.

Azam, on the other hand, was pleased with the manner Fakhar Zaman, Khushdil Shah, Shadab Khan, and Mohammad Nawaz contributed with the bat to help Pakistan win the opening T20 of the series.

Bangladesh did not make any changes for the second T20 encounter. Pakistan is resting Hasan Ali and replacing him with left-arm bowler Shaheen Afridi.

For today’s match, the remainder of the visitors’ squad is unaltered.

Babar Azam, the captain, would be hoping to wrap up the series by going 2-0 and defeating Bangladesh for the second time in this match.

The match is set to begin at 1:00 p.m. at the Shere Bangla Stadium in Dhaka, the same location as the first T20 match.

On Monday, November 22, the three-match T20 series will conclude with the final.