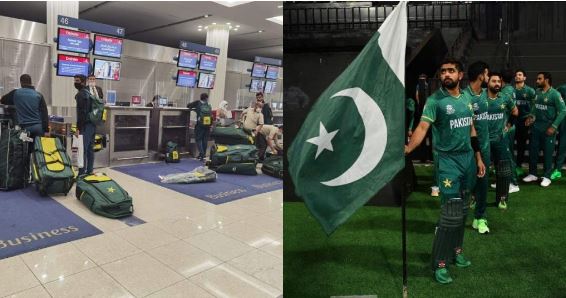 Pakistan cricket team went to Bangladesh to contest a three-match T20I and two-match Test series following defeat in the semi-final. On Saturday, the aircraft transporting them arrived at Dhaka’s Hazrat Shahjalal International Airport.

After their breaks, captain Babar Azam and experienced cricketer Shoaib Malik will return to the team on November 16.

When the Pakistani team arrived in Dhaka, they went directly to Hotel Sonargaon. It’s the first time a team hasn’t had to serve a required quarantine since the start of Covid-19. Members of the visiting squad who are Covid-19 negative and have been jabbed twice can even move about freely.

Except for Mohammad Hafeez, all of Pakistan’s World Cup cricketers are in the team for the T20I series against Bangladesh. Khushdil Shah, Shahnawaz Dahani, and Usman Qadir, who accompanied the squad to the World Cup as reserve players, have been called up. Iftikhar Ahmed, who missed out on a spot at the World Cup, has also been called up.

On November 19, the T20 series will start. On November 20 and 22, the following two games will take place. The Sher-E-Bangla National Cricket Stadium in Mirpur will host all the T20Is.

The first Test will take place at Chattogram on November 26. The teams will then travel to Mirpur for the second Test, which will begin on December 4th.

Pakistan team departs from Dubai to Dhaka for three T20I and two Test match series against Bangladesh which begins on 19 November.#BANvPAK | #HarHaalMainCricket pic.twitter.com/0lJqAHFYie