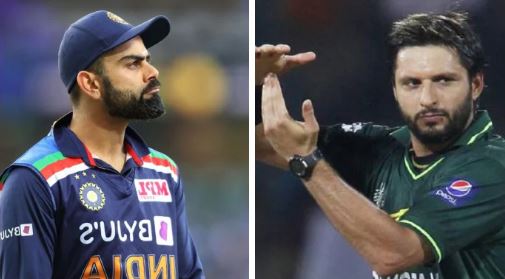 Former Pakistan captain Shahid Afridi has made a bold declaration about Indian captain Virat Kohli’s position as team captain, after the Men In Blue were knocked out of the T20 World Cup in the quarter-finals.

Afridi told a private tv station that if Kohli wants to improve as a batsman, he must immediately resign as captain in all forms.

Kohli has already stood down as T20 captain, and Rohit Sharma has been named in his stead by the Board of Control for Cricket in India (BBCI).

“I believe he’s been a fantastic force for Indian cricket,” Afridi added, “but I think it’s better if he opted to quit as captain in all forms now.”

“I believe Virat should step down as captain and focus on the cricket he has ahead, which I believe is sufficient. He is a great batter who can play without worrying about anything else. He’ll have a great time playing cricket, “he stated.

The former captain also lauded Sharma’s appointment as the new T20 captain by the BCCI.

“I’ve known Rohit for a year and think he’s a remarkable player with a great attitude. His greatest strength is his ability to remain calm when necessary while displaying aggressiveness when necessary, “As per Afridi.

As he discussed his achievements as the captain of the Mumbai Indians in the Indian Premier League, Shahid Afridi believed Sharma has the mental potential to be a powerful leader.

“He’s a top-level player with excellent shot selection and the mindset to be a strong team captain,” Afridi added.