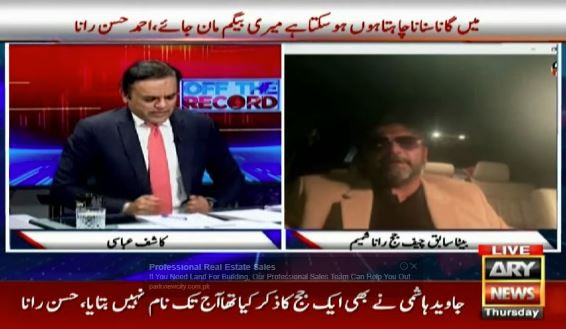 During the conversation, the host asked him whether he could discuss his father’s situation, who is also his client. According to Ahmed Hassan Rana, a Supreme Court lawyer, his father contacted him today after he appeared on a television station, stating, “enough programmes done.”

Kashif went on to inquire if his father had met Nawaz Sharif in London. Rana inquired if it made a difference, noting that his father had not informed him of any meeting.

Rana appeared more interested in discussing his personal difficulties, claiming that he has no power in his house and that his wife is upset with him, and that he is on the road contemplating how to make up to her.

“Can you help me make up with my wife?” he requested Kashif. To which the anchor said he could not.

He then asked Kashif if he may sing a song for his wife on his program, but the host refused because it was national television.

Earlier, Rana Shamim’s son Ahmad Hassan Rana appeared on Geo News’ ‘Aaj Shahzeb Khanzada Kay Sath,’ in which he described his connection with his father, adding that if he has to go play snooker at 10 p.m., his wife will approach his father for approval on his behalf at 09:45 p.m. He also queried the host, wondering if Shahzeb needed permission from his father to be out late at night. He does not seek permission from his father, according to the anchor.