Home Entertainment Pappu Sain, the pride of lahore loses his life to cancer 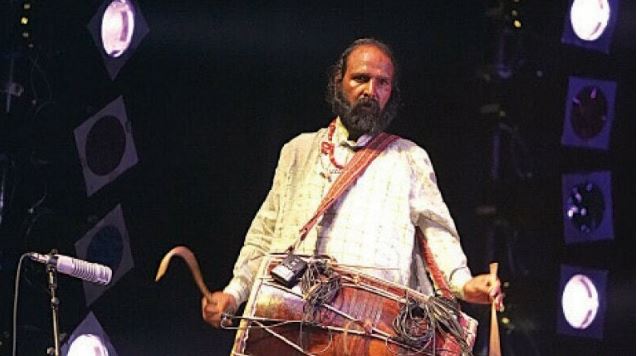 Zulfiqar Ali, often known as Pappu Sain, a well-known drummer, died on Sunday in Lahore after a long battle with cancer.

He had been confined to the Pakistan Kidney and Liver Transplant Institute (PKLI) for about a month due to liver illness.

His funeral rituals were performed at Baba Shah Jamal’s shrine, and he was afterwards laid to rest in Mai Sahiba’s shrine in Chak Juhmra village, where he was born. His qul will be conducted at his house in Lahore’s Shalamar Gardens on Monday (today) at 3 p.m.

Pappu Sain, a Tamgha-e-Imtiaz award, has received praises for his talent not just in Pakistan but also overseas, and has performed at both local and international festivals.

He had followers all across the world, especially those who enjoy the Sufi heritage of drumming. In performing on a drum, he was a flag-bearer of Sufi heritage.

Above everything else, he had a unique connection to Lahore, where he lived and entertained enormous crowds every Thursday at Baba Shah Jamal’s tomb.

His spiritual connection to the shrine was unwavering, and he would never play commercialized rhythms on his drum, since he was a devout Sufi who lived his life in the Sufi manner.

He was the greatest drummer Pakistan has ever had, and he wowed enormous crowds at our events and on our tours throughout the world.

“We’ve lost two of our best drummers this year — Goonga Sain and now Pappu Sain,” Sadaan Pirzada, the driving force of Rafi Peer Theater Workshop, remarked. Goonga began performing with Pappu Sain when he was a little kid, and was later cast in the Rafi Peer Theatre’s performance of ‘Patay Khan’ in 1992.

Pappu Sain was also a member of the music group Overload. His overseas concerts drew large crowds in the United States, the United Kingdom, Canada, the United Arab Emirates, Germany, and Switzerland.

He had been battling liver cancer, and the government just granted him Rs200,000 in aid. Qalandar Bakhsh, his son, is also a talented drummer who vows to continue on his father’s heritage.

Following the news of Pappu Sain’s death, condolences came in from all over the world. Khayal Ahmad Kastro, Minister of Culture, expressed sorrow over the passing of Pappu Sain, whom he described as a valuable asset to the country.

The pupils of the Alhamra Academy of Performing Arts were likewise saddened by the news of the maestro’s death.