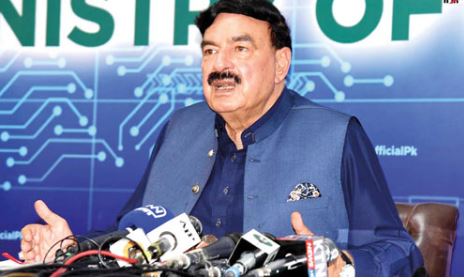 All of the banned organization’s (TLP) requests have been met, besides the deportation of the French ambassador, according to Interior Minister Sheikh Rashid on Tuesday.

He told the media in Islamabad on Tuesday that notice of Lieutenant General Nadeem Ahmed Anjum’s appointment had been given, and that Lt Gen Faiz Hameed will remain DG ISI till November 19.

He said that the rumour storm has died down today, and that the prime minister and the military are on the same page.

In response to the banned group’s protest, Sheikh Rashid stated that the TLP promised to clear the routes by Tuesday midnight, and that the government is willing to compromise on all requests of the outlawed Tehreek-e-Labbaik Pakistan, except the closure of the French Embassy.

The Minister asked the TLP leadership to open the highways in the public’s and country’s best interests. “We don’t want any conflict that might jeopardize Pakistan’s stability,” he stated emphatically.

“We are waiting for them [TLP] to fulfil that commitment,” Rashid continued, adding that the organization had pledged to open all roads by Tuesday. “We don’t have any issues with the group,” he stated, save for one point.

The minister also stated that he will approach the group’s leadership again at 8 p.m. today, citing the fact that TLP workers’ paths are still blocked.

He reaffirmed that the group’s “highest demand” of the French ambassador’s removal is impossible due to “many obstacles.”