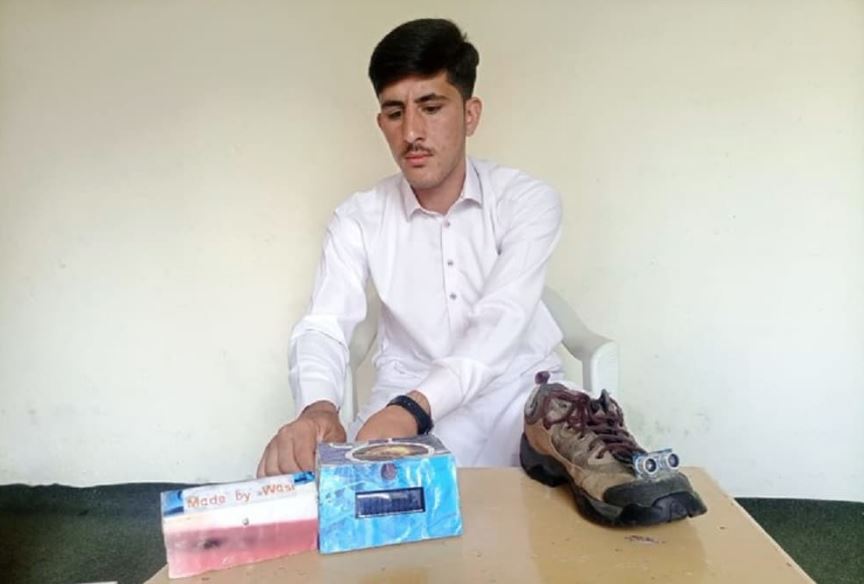 Wasiullah, a youngster from Khyber Pakhtunkhwa created “smart sneakers” that utilize vibration and sound to notify visually impaired individuals of any obstacles within a 1.2-meter radius.

A 17-year-old from Swat, has created “smart shoes,” which, if marketed on a national scale, have the potential to improve the lives of visually impaired individuals.

Also Read: E-sports tournament to be launched in Pakistan

In this regard, he disclosed that his interest in invention began at an early age, when he used to repair and fix defective battery-powered toys.

The kid described his invention as having an ultrasonic sensor and an Arduino microcontroller. The shoes are configured to give sound and vibration warnings to the wearer in the event of an obstruction.

He went on to say that once “smart shoes” are mass-produced, visually impaired persons would no longer require sticks or aides while walking.

Wasiullah stated that a pair of “smart shoes” costs around Rs. 4,500. However, he would be unable to afford their mass manufacturing because he is also responsible for his own education expenses.

Wasiullah’s physics instructor, Mohammad Farooq, said that he is the most brilliant student in the college. He also stated that he hoped to create a wheelchair to assist vision impaired persons in navigating their environment. Wasiullah, on the other hand, was prevented from doing so due to financial constraints.

He recognised that comparable shoes are available in a number of nations, but their costs are out of reach for many visually challenged Pakistanis, and he urged the government to promote Wasiullah because his smart shoes are less expensive.

Farooq asserted that Wasiullah had the qualities required of a great scientist. He only needs adequate supervision, coaching, and opportunities to make his country proud on the international stage.

Meanwhile, Sajid Shah, Director General (DG) of the Directorate General of Science and Technology (DGST) KP, has declared that he will provide Wasiullah with the required support to pursue further education and begin mass manufacturing of “smart shoes.”

Sajid Shah has also invited Wasiullah to the DGST headquarters in Peshawar, where DGST experts would evaluate the shoes before commercialising them.