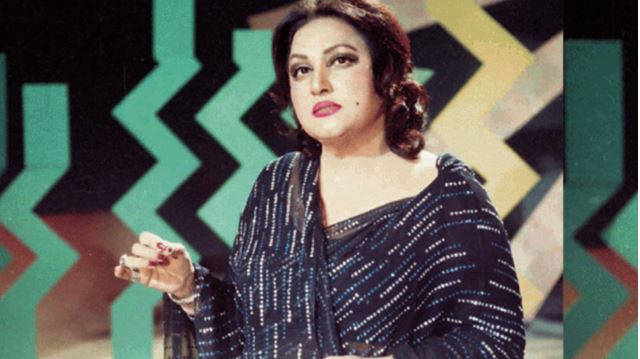 On late Noor Jehan’s birthday, Pakistani netizens expressed gratitude to the late singer, one of the country’s most beloved figures. It’s no secret that the queen of melody’s legacy is adored by admirers all around the globe, and many people, including members of her family, turned to social media to honour her wonderful melodies, captivating personality, and patriotism.

She was born in Kasur into a family of musicians and began her career as a child superstar in Urdu and Punjabi films when her family moved to Calcutta.

After moving to Pakistan in 1947, Noor Jehan appeared in several films as an actress and even directed one, Chanway. She became well-known in the country’s classical music industry for her vocal prowess.

On the occasion of her birthday, the members of the family paid tribute to their time spent with the queen. Granddaughter Natasha Ali Lakhani used Instagram to commemorate her time with her grandma. “Walking down memory lane, my gorgeous Nano with a bald and confused looking me” “I miss the glimpses of the lady she was when she was with her loved ones more than her outward character, which was larger than life and will last for all eternity.

Lakhani went on to describe her mother’s fondness for tuna fish sandwiches and grilled corn on the cob. Fashion and make-up are two of her great passions. I could have stayed up all night watching her get dressed or wander the aisles of Selfridges. Her faith was stronger than anyone else’s that I had ever encountered. Later in life, I came to understand who she was. Even before I realised she was Madam Noor Jehan, I had a strong feeling about her. A true gem, both physically and spiritually. Now that God’s unique child is with her Allah, she is complete. To have had grandparents on both sides of my family has been a blessing. They have shaped who I am today. She stated, “I have learned more from their humility than their grandeur, and that in and of itself makes them all the greatest of the greats.

Hina Durrani, Noor Jehan’s daughter, recalled her mother with affection. One other person who she praised on social media was her “loving mother,” whom she celebrated this week and every waking minute of her life. “Not a single second has passed since you left us where we haven’t all missed holding you, laughing with you, being babied by you, pampered by you and being completely loved by you. You. Your voice, your laugh, your face — everything of it. How I wish to be able to hold you [loving mother] once more. I hope and pray that you are resting peacefully in Paradise’s highest echelons.

Daughter Mina Hassan also used Instagram to share a personal message with her followers. To begin, she reflected on her mother’s memory. “In addition to being an icon, a very brave woman, and a brilliant vocalist, my family and I also experienced the loving and kind mother that Madam Noor Jehan was in her private life. Please accept our heartfelt thanks for all you did for us, including the excellent meals you prepared and the role you played as a feminine role model during the male-dominated era of the 50s and 60s. More than words can express how much I adore and miss you.”

Admirers of Noor Jehan also paid their respects to the singer on Twitter, where they sent messages of condolence.

‘Gaye Gi Duniya Geet Mare’ by Noor Jehan is the only music that makes sense to share on her birthday today, a Twitterer said.

On Noor Jehan’s birthday today, this is the only song that makes sense to share … ‘Gaye Gi Duniya Geet Mare’ by Noor Jahan https://t.co/Q0lhmCIpQJ

On Noor Jehan’s birthday, I wish she were still ‘hamesha kol’ saaday (always with us),” one person wrote in a tweet.

Even now, over two decades after her death, Noor Jehan remains one of Pakistan’s most beloved singers, and she is revered for reasons beyond her singing.