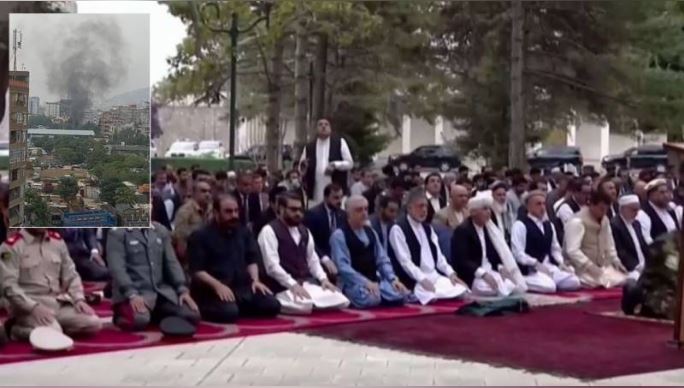 According to newspaper reports citing the Afghan interior ministry, three rockets fell about 8:00 a.m. in the state capital before President Ashraf Ghani’s speech during Eid al-Adha prayers. The deafening blasts could be heard across the strongly protected Green Zone, which includes the presidential palace and numerous embassies.

Despite numerous loud explosions in the vicinity, footage from Afghan news networks shows the Afghan premier continuing with his prayers.

Video by national TV shows the moment rockets landed near the Presidential Palace during Eid prayers this morning. pic.twitter.com/WmEniyfLfM

During an interview with a foreign news outlet, Afghan Interior Ministry spokesperson Mirwais Stanikzai stated, “Today, the opponents of Afghanistan conducted rocket strikes in several sections of Kabul city.” He further stated that “all of the missiles struck three separate parts, with no injuries recorded.” “Our teams are looking into the situation,” he continued.

Later, the Afghan president gave an address from an open podium, which was aired on local TV networks. The person also stated that similar attacks against the presidential residence have occurred in the past.

Unlike in past years, the Taliban did not proclaim a truce for the Eid vacation this year, despite repeated requests from Afghan authorities and the global community.

Meanwhile, the new assaults coincide with persistent instability in the aftermath of the US withdrawal, and militants have continued to attack around the nation.

Over the weekend, the Taliban’s top leader, Hibatullah Akhundzada, stated that he “vigorously favours” a political settlement — despite the fact that the militants are conquering districts, seizing border crossings, and surrounding provincial capitals.