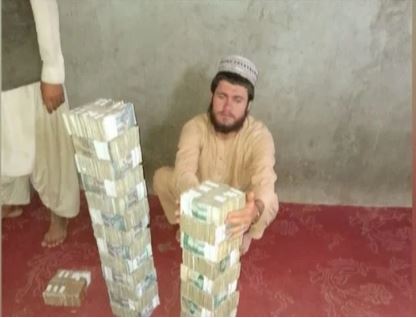 According to an Afghan Taliban announcement, about 3 billion in Pakistani cash was discovered at Afghan military checkpoints in the Spin Boldak district of Kandahar, which was cleared by Afghan security forces.

Also Read: Afghanistan’s brightest look for a way out as murders rise

The Taliban intensified its assault on the Afghan government on Wednesday, with their spokesperson claiming that the organisation has taken over the vital Spin Boldak border crossing with Pakistan.

In a statement, Taliban spokesperson Zabihullah Mujahid claimed, “The Jihadists have taken a key border town called Wesh in Kandahar.”

“With this, the key route between (Spin) Boldak and Chaman, as well as Kandahar customs, has been taken over by the Mujahideen.”

Pakistani security forces acknowledged that the bridge had been taken over by the Taliban. The Afghan ministry of defence stated that it was monitoring the situation.

“On the Afghan end of the Chaman-Spin Boldak border checkpoint, the Taliban has gotten hold,” a Pakistani security source told AFP on speaking anonymously.

“They’ve hoisted their banner and taken down the Afghan flag.”

According to experts, the Rs3 billion was allegedly obtained by Afghan security forces as bribes from smugglers.

The money was used by the Afghan intelligence organisation NDS to fund militants to carry out strikes in Pakistan.

According to experts, Afghan agencies are also operating as a sub-franchise of Indian and other anti-Pakistan groups.