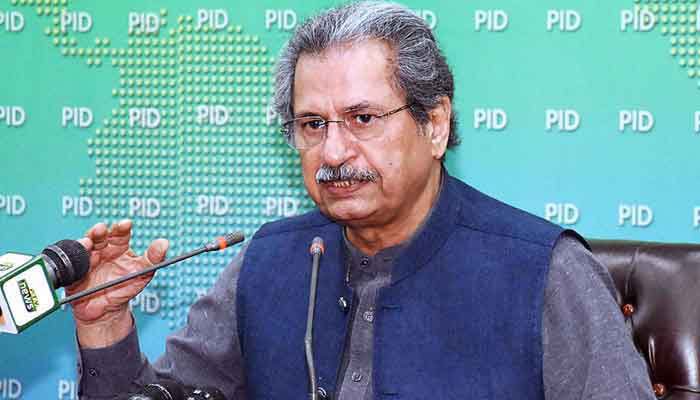 Earlier this month, Shafqat Mehmood ordered to close the schools in Khayber Pakhtunkhwa, Punjab, and Islamabad. These were the areas where the chances of spreading the third wave of the pandemic were maximum.

Despite the closure of Educational Institutes, the Federal Education Minister announced that the exams of Intermediate, Matric, and Cambridge will take place as per the schedule.

While the majority of the students want the exams to be cancelled this year, however, it’s strange to observe the tweets with the hashtag  “Shafqat uncle humen parhne dain” to be trending in Pakistan.

Seems like government on mission to impose a longtime lockdown on Education on the name of Corona prevention. Instead an issue SOPs rules for educational institutions & schools, govt preference of closure of schools is destructive & harmful. Please Open!#شفقت_انکل_ہمیں_پڑھنے_دو pic.twitter.com/uLAlbI9DX5

The prevailing Irony is that whole of Pak. is open and educational institutions are closed.The academic gap being generated due to this closure will take years to cover.The Gov. should revise its policy and devise an approach to reopening the edu. sector.#شفقت_انکل_ہمیں_پڑھنے_دو

After Shafqat Mehmood announced the closure of Educational Institutes till Wednesday 24th of March, another meeting was held yesterday. After the meeting, it was announced that Schools and Colleges of areas other than Khayber Pakhtunkhwa, Punjab, and Islamabad will be opening from the 25th of March. Another announcement was made that the FSC and Matric papers are postponed and will be rescheduled. It was also said that the decision whether the Cambridge exams are to be held or cancelled- is yet to be announced and the team is in constant contact with Cambridge.

Considering the current situation of Pandemic in Pakistan; The government preferred to postpone the exams, rather than cancelling them. While the government took time to give the final decision the Intelligent students of Pakistan flooded Shafqat Mehmood’s email with messages; appealing to him to let Cambridge exams be held this year.

With another hashtag “Shafqat uncle hum par reham Karen,” the rest of the other students are trying their best to get the Cambridge exams cancelled. The folks on Twitter have various things to say about this. People are suggesting the Pakistan government- kill Corona, instead of killing Education.

He said that O, A level students are calling and writing emails whereby he didn't even mentioned about Twitter trend . So I recommend that we should call him instead of squandering our precious time here.#Shafqatmehmood#cancelcieexams2021#شفقت_انکل_رحم_کریں https://t.co/m9qxWG7ws3

The Jamiat Punjab University Tweeted that Pakistan has forcefully banned the academic institution- at the cost of education. The decision is unfair, unjust, and they demand the educational institutes to be reopened- to save the future of this country. This trend of Shafqat Uncle Humen prhny dain was also set by the Jamia Team Social Media.

The policies of incumbent regime manifest their intention to destroy edu. in PK. Students reject today’s decision by @EduMinistryPK to close institutions. If the decision is not revised, Students PK. along with @JamiatPK will initiate stud. movement.#شفقت_انکل_ہمیں_پڑھنے_دو pic.twitter.com/rUOCvYPAF7

The students believe that Shafqat Mehmood is playing with their future. While some toppers were contented with their preparation and targeted those who aren’t prepared for the exams and said that they are using the excuse of Covid to get their exams cancelled.

A Twitter user posted a picture of Shafqat Mehmood with his daughters and Imran Khan with his sons. In the caption, he was critical that isn’t the closure of educational institutes affecting the children of these rulers? He sarcastically further said that I forgot that the children are not even acquiring education in this country.