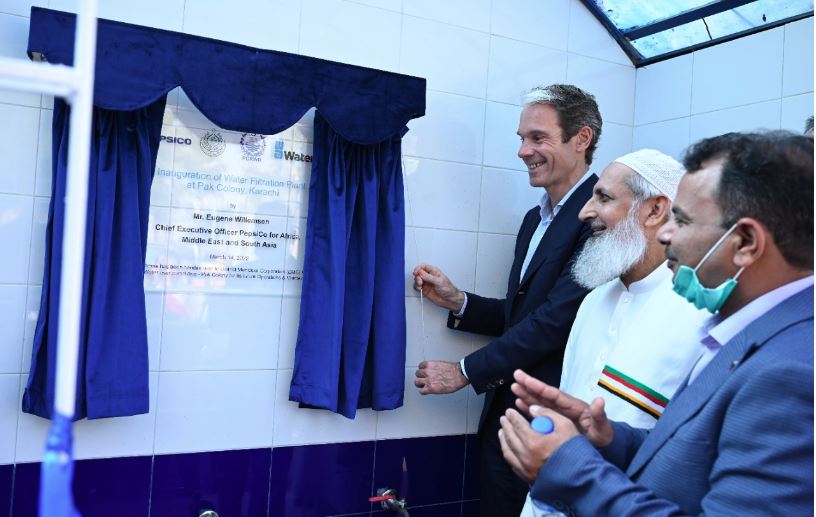 More than one hundred thousand people in Karachi to benefit from newly inaugurated water filtration plant at Pak Colony, Karachi. Eugene Willemsen PepsiCo CEO Africa, Middle East and South Asia inaugurated the water filtration amenity that was commissioned with the help of the international non-government organization, WaterAid, with funding from PepsiCo Foundation, the philanthropic arm of PepsiCo. Country Director WaterAid Pakistan, Arif Jabbar was present at the inauguration ceremony.

The water filtration plant enables access to safe water for 100,000 citizens. The water facility has the capacity of filtering 50,000 litres of water every day. Clean water is served to multiple communities through 6 distribution points.

Water access has been extended to three educational institutions in the vicinity of the facility. A water user committee have been formed to oversee the operation and maintenance of the water filtration plant. An integral part of the program has been community sensitization on hygiene, water safety and water conservation. 300 children were trained on hygiene promotion through interactive sessions competitions.

PepsiCo’s ‘Access to safe water’ program is supporting the Government’s Clean Green Pakistan initiative aimed at environmental sustainability by providing access to clean water to 200,000 people in the urban underserved areas of Karachi, Lahore and Islamabad.

Mr. Eugene Willemsen, CEO PepsiCo Africa, Middle East and South Asia said, “Taking positive action towards the environment and communities is ingrained in our pep+ mission. Providing safe water access continues to be our priority in Pakistan and globally.”

WaterAid Country Director Arif Jabbar Khan said that “WaterAid values the long-standing partnership with PepsiCo for provision of clean water for drinking to communities in Pakistan. The role of private sector is vital for achievement of Sustainable Development Goals, especially Goal-6.”

Mr. Khan also said that “WaterAid has ensured greater ownership of and engagement with communities in Punjab, Sindh and Islamabad for long-term sustainability and continued benefits of the PepsiCo sponsored clean water projects. This has been a key factor in the success of these initiatives.”

PepsiCo’s water strategy is designed to enable long-term, sustainable water security for its business and for local communities that depend on an accessible and reliable supply of clean, safe water. Through partnerships funded by The PepsiCo Foundation, the company’s philanthropic arm, PepsiCo since 2006 has helped more than 55 million people gain access to safe water through distribution, purification, and conservation programs, far surpassing the company’s original target to help 25 million people by 2025. PepsiCo has set an ambitious new target to expand safe water access to 100 million people by 2030 with an immediate-term focus on supporting water distribution, sanitation, and hygiene practices.