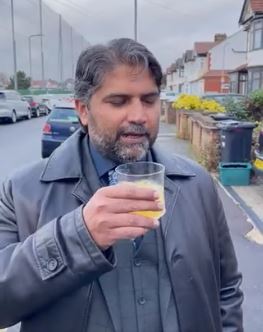 Ahmed can be heard stating in a video posted by journalist Murtaza Ali Shah, “This [party] is merely on WhatsApp for now; we have not legally registered it.  Like-minded individuals, including colleagues from my high school, college, and university, have teamed together to create this [political] party.”

“Its title is Shaan-e-Pakistan, however it will take some time to establish. We require funding. We are attempting to build it on our own and are making every effort to raise finances within our own. Furthermore, we don’t want to become trapped like Imran Khan sahib,” Ahmed stated.

Speaking regarding his political tactics, Ahmed Hasan Rana stated that he admires Pakistan’s father, Quaid-e-Azam Muhammad Ali Jinnah. He claimed that he will not provide a different policy program than the current prime minister.

“There ought to be a Madina ki riyasat, education should be free, and conducting business should be simple. It’s important to do things rather than simply talking,” Ahmed added.

When questioned how he will distinguish from the premier, Ahmed stated, “I am a lawyer, and we are taught to develop a policy first, then implement it.”

While discussing his future political aspirations, Ahmed continued to consume his trademark “juice.”

“Khan sahib is seeking for another opportunity, much like his predecessors Benazir and Nawaz. I am certain that I can outperform Khan sahib,” Ahmed remarked.