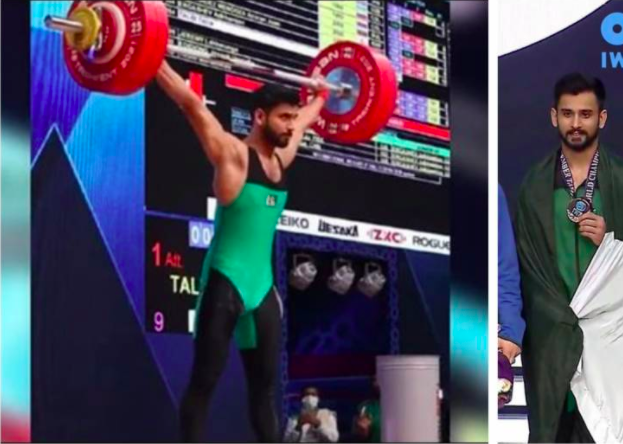 It is the 21-year-old athlete’s first title for Pakistan at the World Championship.

He earned bronze in the men 67kg division by lifting 143kg in the snatch category.

Talha Talib the Pakistani Rising Star has yet again made Pakistan proud where it mattered the most.
The Falcon won bronze medal in World Weightlifting Championship held in Tashkent Uzbekistan 🇺🇿🏋️‍♂️
Good job Boy. pic.twitter.com/yC3034NvuK

Earlier this year, Talha Talib represented Pakistan in the 2020 Tokyo Olympics, where he fell just two kilos short of breaking the world record with a total weight lifting of 320 kilos.

Talha, competing in the 67kg men’s weightlifting category, dominated for a time until being overcome in the final rounds by competitors from China, Colombia, and Italy.

The 21-year-old weightlifter, the first from Pakistan to compete in the Olympics in 44 years, started the tournament without a trainer, but he proved his worth.

South Korea’s fourth-place finisher lifted 321 kilograms, whilst Italy’s Marko Zanni took bronze with a total lift of 322 kilos — 145 in snatch and 177 in clean and jerk.

Talha Talib received an overwhelming response with everyone praising his achievement.

Congratulations to @_talha_talib who won Pakistan's first-ever medal at World Weightlifting Championship with a bronze in snatch (143kg) in 67kg. pic.twitter.com/8maLdMnroR

We wish Talha Talib ultimate success in his future endeavors.