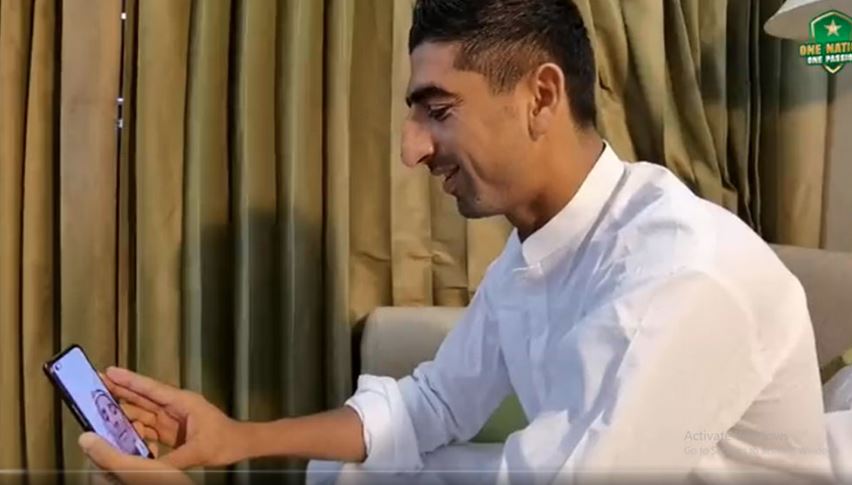 Pakistani fast bowler Shahnawaz Dahani made his international debut for Pakistan on Monday, becoming the first player from Larkana to do so.

Dahani claimed his first international wicket in his first over while playing for Pakistan in the third T20I against Bangladesh. After surrendering a boundary, he clean bowled Najmul Hossain Shanto on the very next delivery.

Earlier in the day, in an emotional video conversation, the fast bowler asked his mother to pray for him. In a video uploaded on Twitter by the Pakistan Cricket Board (PCB), Dahani can be heard addressing his mother that he will be making his T20I debut and urging her to keep him in her prayers.

“I’ll be watching you bowl today and praying for your success,” his mother said, adding that she would also be praying for Pakistan’s success.

Shahnawaz Dahani informed PCB’s media team in the same video that he was really thrilled about his debut and that it kept him awake all night.

“I’m so delighted that I can’t put it into words. I couldn’t sleep last night because I was so happy,” he continued.

The fast bowler described it as a “dream come true.”

Dahani stated that he is from a tiny village near Larkana, where he began playing tape ball cricket as a youngster.

“I was tremendously enthusiastic about playing cricket. I followed my passion and never looked back,” he continued.

He expressed gratitude to the people of his hometown for their affection and support after he became the PSL’s greatest wicket-taker in the previous season.

“I can’t express how they embraced me when I returned to Larkana. They must be overjoyed that a cricketer from Larkana is making his debut today.”

Dahani pledged to build on his previous efforts and give his all in his first encounter.

“Insha’Allah, I shall give it my all in the match. However, the outcome is in Allah Mian’s hands,” he continued.