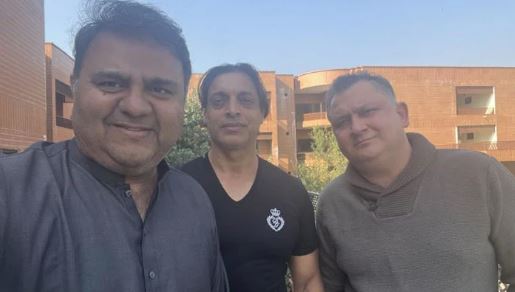 During a meeting at the house of Minister for Information and Broadcasting Fawad Chaudhry, legendary Pakistan fast bowler Shoaib Akhtar and PTV Sports host Dr Nauman Niaz achieved an understanding.

Last month, cricket fans were outraged by Akhtar’s “disrespect” on a state-owned television programme. In the midst of cricket superstars such as Sir Viv Richards and David Gower, the TV host had urged the cricketer to leave his show.

A meeting was scheduled between Akhtar and Dr Niaz at Chaudhry’s house, after which the two sides’ disputes were solved.

Dr Niaz apologized to Akhtar and stated that what happened on the live programme should not have occured. He stated that their friendship, which has lasted 30 years, should continue.

Saleem Safi, a senior Geo News journalist and political commentator, had driven Akhtar to Chaudhry’s house, while Dr Niaz had been summoned by the information minister himself.

“All is well that ends well,” Chaudhry tweeted beside a photo of himself, Akhtar, and Dr. Niaz on Twitter.

After the conversation, Akhtar tweeted that it was a “unpleasant episode” that occurred on national television that wounded his feelings, which is why it took him so long to change his mind.

It was an unpleasant incident on National Television and it had hurt my sentiments thats why it took me a while. Taking a higher moral ground, i am accepting the apology of @DrNaumanNiaz . Lets move on from this.

Dr. Niaz has “no personal hostility or problem” with Shoaib Akhtar, according to him. “I requested that Nauman Niaz issue an apology to the country for his actions,” the former bowler added.

“On the night of the event, I had forgiven Nauman Niaz,” he stated.

Dr Niaz has now apologised to both Akhtar and the country, according to Akhtar.

Chaudhry has requested that a defamation notice given to him by the state-run television station be removed, according to the former cricketer.

“All of this should be done away with, and the letter should be retracted,” he remarked, quoting Fawad Chaudhry sahab.

“Everything is in order; there are no issues on my end,” he continued.

Dr. Niaz’s statements, according to the former pacer, were “wrong.” “He has apologised, but things might not have turned out so badly if he had done so sooner. It’s a little late, but everything is OK now, “he stated.

The discussion, according to Akhtar, was held in a friendly mood, and he acknowledged that Safi and Chaudhry were instrumental in settling the issue.