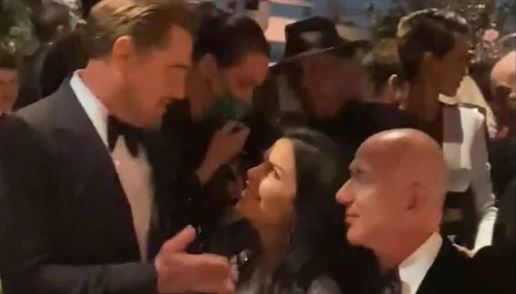 When Leornado DiCaprio arrives into a gathering, he is known for turning heads. Lauren Sanchez, the girlfriend of Amazon CEO Jeff Bezos, appears to be star-struck this time around.

Lauren Sanchez can’t seem to tear her gaze away from the star, who briefly participates in a chat with her boyfriend Bezos, in a video circulating on Twitter.

The group visited the LACMA Art+Film Gala in Los Angeles on Saturday, which resulted in the viral video. In just a few days, the video has received over 16 million views.

Netizens can’t stop making humorous remarks on the issue in the midst of the funny encounter.

One Twitter user remarked, “All that money and still helpless to protect your lady from lusting after Leo.” “Leo saw this peering up at him and left,” remarked another. “Can’t blame the man, honestly.” “Your Amazon Prime membership has been revoked,” said another.