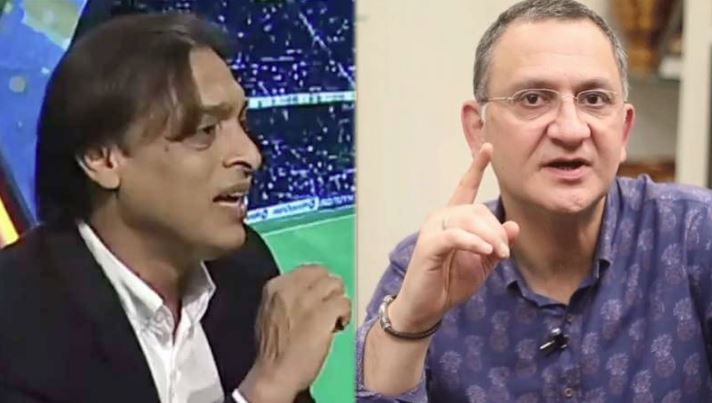 Shoaib Akhtar, a former Pakistani pacer, left a live cricket broadcast on the government sports channel when host Dr Nauman Niaz instructed him to ‘leave the show’ during a ‘heated dispute.’

‘Rawalpindi Express,’ a cricket commentator, announced his resignation and walked away after a well-known cricket broadcaster labelled him “rude” and informed him that “he is free to quit if he wants to.”

In a viral video from a state broadcaster special show, the former fast bowler claimed that the host humiliated him on live television after the Pakistan-New Zealand T20 World Cup match.

Full Clip of the Phadda between Dr Nauman Niaz and Shoaib Akhtar pic.twitter.com/jrpDaN6ms0

It all started when Akhtar made a remark about Haris Rauf disregarding the Nauman’s line of questioning.

Nauman became enraged and informed Akhtar that he had been misbehaving with him and that he would not allow it, and that it would be best if he left the programme and went to a commercial break.

Following their verbal altercation, Akhtar removed his microphone and walked away, while Ijaz, the head of PTV’s sports department, made no attempt to contact him and continued with the programme.

As a result of the viral footage of the unwelcome circumstance on national television, social media users have expressed sympathy for him and demanded an apology from Dr. Numan Niaz.

Later that day, the former pacer-turned-analyst resorted to Twitter to clear the matter.

“As a result of many video spreading on social media, I thought I’d explain.” “When Dr. Noman asked me to leave the show, he was obnoxious and unpleasant,” he stated in one of the tweets.

Multiple clips are circulating on social media so I thought I shud clarify. pic.twitter.com/ob8cnbvf90

“It was uncomfortable,” Shoaib Akhtar said, “particularly when icons like Sir Vivian Richards and David Gower were present on the set with some of my colleagues and seniors, and millions were watching.”

“I tried to rescue everyone from humiliation by claiming that I was pulling Dr. Noman’s leg on the condition that he gently apologize, and we go on with the presentation, which he refused to do.” Then I didn’t have an option,” he continued.