Home Business PepsiCo, in cooperation with WWF-Pakistan, is investing PKR 160 million in a... 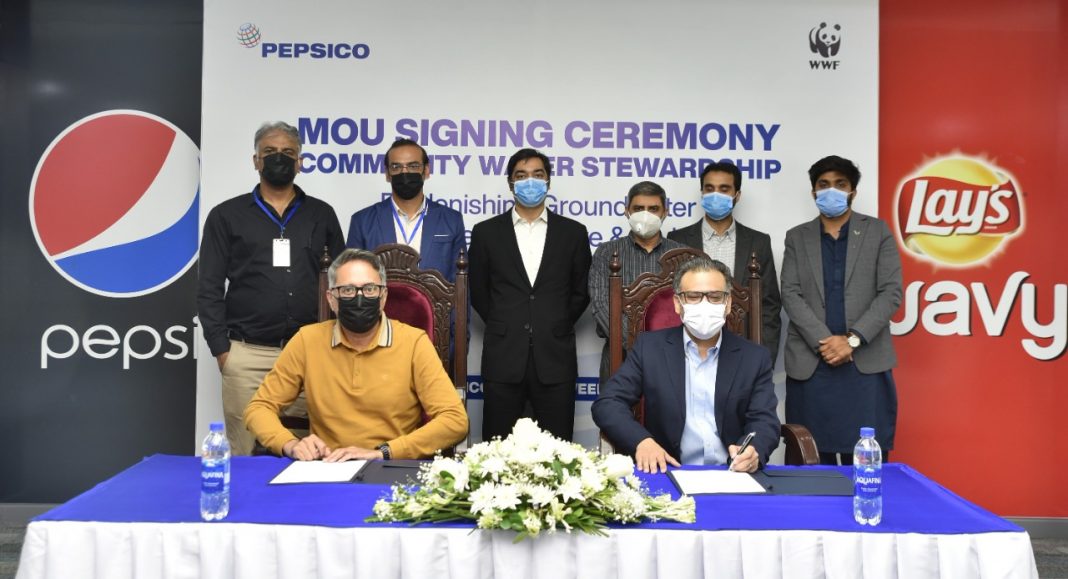 Friday, September 24th, 2021, Lahore: PepsiCo collaborated with WWF-Pakistan to fund PKR 160 million in a community water stewardship initiative with the goal of replenishing 343 million litres of groundwater at local watersheds around their Foods production sites by 2023. The project’s debut was announced during Climate Week with the signing of a Memorandum of Understanding (MoU) between PepsiCo and WWF-Pakistan.

PepsiCo has promised to restore more water than it consumes in its Foods operations through a variety of projects, including rainwater collecting, floating treatment wetlands, and agricultural water-usage efficiency enhancement, as part of this collaboration. The signing of this MoU acknowledges the importance of water conservation and replenishment in addressing climate change-related water shortages in Pakistan. The PepsiCo-WWF Pakistan water stewardship cooperation is also in line with PepsiCo’s worldwide goal of becoming net water-positive in high-risk areas by 2030.

PepsiCo, in collaboration with WWF-Pakistan, will deploy different water replenishment methods at its production locations in order to balance the proportion of freshwater used. The initiative will also educate local populations about rainfall conservation, the re-use of stored water for secondary uses, and groundwater replenishment.

Mr Mohammad Khosa, Director Sales at PepsiCo Pakistan, offered his thoughts during the MoU signing event, saying, “Water shortage is connected with the growing climate crisis, and we have doubled down on our efforts to tackle climate change via water stewardship in our businesses.” PepsiCo prioritises water stewardship in water-stressed Pakistan to assist our government in developing and managing the water sector for optimal use and community benefit. I am really proud of this project because it is a fantastic example for everyone to come out and have a positive influence on water in Pakistan.”

“Urbanization is worsening water insecurity in several of Pakistan’s main cities, including Lahore, where groundwater levels are decreasing at an alarming pace of 2.5 to 3 feet per year,” said Director General WWF-Pakistan Hammad Naqi. These developments necessitate a change of course. Our collaboration with PepsiCo is a significant step toward achieving a sustainable water balance, as we engage with communities in the Lahore and Multan regions to implement cheap, localised, and environmentally responsible solutions to groundwater challenges.”

PepsiCo’s worldwide end-to-end strategic transformation pep+ (PepsiCo Positive) will see the firm prioritise sustainability as a key driver of growth and profit creation. PepsiCo strives to inspire people to make better choices for themselves and the world by generating a good impact at scale and utilising its connections with billions of customers every day. PepsiCo, as a food and beverage business, is acutely aware of the vital role water plays in the food chain and has a vision that wherever PepsiCo works, water resources will be in better condition as a result of the company’s presence.

PepsiCo Pakistan’s long-term water plan seeks to create sustainable water security for the company, natural ecosystems, and local populations that rely on a reliable supply of clean, safe water. Local initiatives include a three-year partnership with WaterAid, which has provided safe drinking water to 112,300 Pakistani people in the cities of Lahore, Islamabad, and Karachi. The collaboration is assisting the Government of Pakistan’s Clean Green Initiative, which is focused on environmental sustainability with the goal of providing safe water to disadvantaged populations.

PepsiCo Pakistan is also working with partners, communities, businesses, and government counterparts to make a positive impact on the water by fully adopting the global Alliance for Water Stewardship (AWS) standard to implement sustainable water management practices at the business and community level – including operational water-use efficiency, smart water usage in agriculture, and local groundwater replenishment.