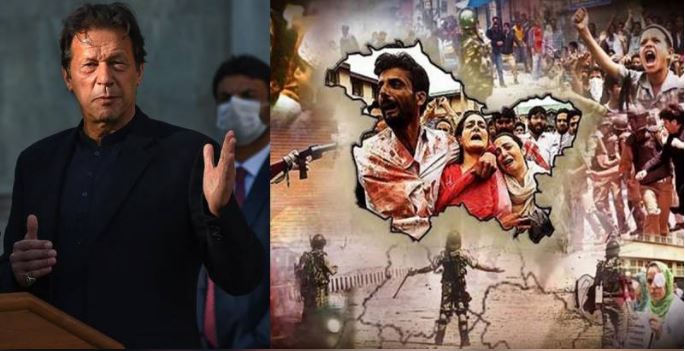 Khan alluded to the 22 Kashmiris killed 89 years ago during a demonstration against the dictatorial reign of a Hindu Maharaja in the Muslim majority state as the “ancestors of today’s Kashmiri struggle” in a tweet.

“We stand with Kashmiris on Kashmir Martyrs’ Day and pay respect to 22 Shuhada on 13 July 1931, slain when the Dogra Maharaja’s forces fired on peaceful protestors,” the premier tweeted.

We stand with Kashmiris on Kashmir Martyrs’ Day & pay tribute to 22 Shuhada of 13July1931, martyred when the Dogra Maharaja's soldiers fired on peaceful protestors. Kashmiris' struggle against tyranny & illegal Indian Occupation is steeped in a history of resistance & sacrifice.

According to the tweet, “Kashmiris’ battle against oppression and unlawful Indian Occupation is entrenched in a legacy of resistance and sacrifice.”

In another tweet in the series, PM said that Kashmir Martyrs Day is a reminder of the ultimate sacrifice heroic Kashmiris paid for independence.

This indomitable spirit of resistance remains alive as Kashmiri men & women continue to fight illegal Indian Occupation. Pakistan stands with the Kashmiris in their just struggle & will not compromise till they get their right to self determination guaranteed by UNSC resolutions.

“This tenacious spirit of resistance lives on as Kashmiri men and women battle the illegitimate Indian occupation. Pakistan supports the Kashmiris in their rightful fight and would not back down till their right to self-determination is secured by UN Security Council resolutions,” it said.

On July 13, 1931, tens of thousands of Kashmiris assembled outside the Central Jail in Srinagar, where Abdul Qadeer, a British Indian native, was being prosecuted for treason for inciting Kashmiris against the Dogra monarch during a meeting at Khanqah-i-Muallah on June 21, the same year.

Remembering Kashmir Martyrs Day- July 13, 1931.
A THREAD
On 13 July 1931, thousands of Kashmiris flocked to the central jail in Srinagar to see the trial of Abdul Qadeer. As the time for obligatory jumma prayer approached, a Kashmiri stood up to deliver the adhan. #Kashmir pic.twitter.com/VpGA4KoTku

One of the youngsters rose up to offer a call to prayer during Zuhr prayer and was shot and killed by the military. He was replaced by another fellow, who also died. In total, 22 men rose to finish the call to prayer, and all of them died within a short period of time.