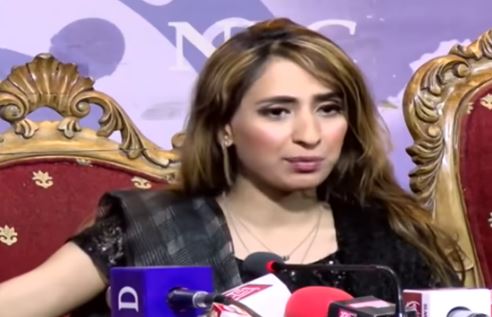 At a news appearance in Islamabad, Khan was joined by her sister, Eman Khan. She revealed that an attempt on her life was perpetrated on May 26 after she began making allegations about Amir earlier this year.

She went on to say that the assailants were headed by a man named Syed Mumtaz Bokhari, who Hania claims is Aamir Liaquat’s driver.

Also Read: Aamir Liaquat insulted by Hania outside his office

The assailants claimed threatened to harm her and her family if she did not halt her campaign against the PTI leader, she continued.

She stated that Aamir married her in March of this year after divorcing Bushra, his first wife, and Tuba, the television personality’s second wife.

Hania Khan reiterated his claims of marriage and stated that she will continue to fight for her right until she is successful.

She went on to say that her sister saw his marriage to Aamir Liaquat and that the latter had asked her not to make the connection public until the PTI took power.