Nafiah Fatima, a 21-year-old Pakistani woman, suffered serious burns to her face, eyes, stomach, and arms following an acid attack on her Elmont home on Arlington Avenue in the United States.

Fatima and her mother left their car outside their house on March 17. They were about to enter when an anonymous man approached her and poured acid in her face. The event was captured on video by a nearby house monitor. 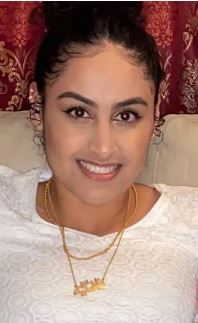 The entire incident was caught on the surveillance camera of a friend, Shazia Anjum, who later organized a GoFundMe campaign for her. Anjum posted a 42-second video of Fatima unloading the car with her mother and following her inside before being assaulted just feet away from her front entrance.

Anjum claimed on the GoFundMe page that they later learned the chemical was “a dark brown acid believed to cause blindness and serious burns.” She said the intruder was aware of the threat. He was wearing gloves at the time and said that Fatima, a Hofstra University student, almost died as a result of the harrowing experience.

“Had the acid gotten into Nafiah’s lungs she would have died. When Nafiah screamed it caused the acid to go into her mouth, burning her tongue and throat, which prevented her from breathing,” Anjum explained.

“When Nafiah ran into her house and her parents saw her, they immediately tried to help her. But in the process, the acid burned their hands and forearms as well,” Anjum added. “If her parents were not home to help her and call 911 right away she would not have made it.”

According to police, Nafiah Fatima suffered “severe physical injuries” and was taken to a local hospital for treatment after the incident. According to the GoFundMe page, her injuries included “serious burns” to her face, eyes, stomach, and limbs.
“Nafiah was wearing contact lenses that night and the acid melted the contact lenses onto her eyes,” Anjum continued. “We don’t know if Nafiah will ever regain vision again.” At this time, it does not appear that police have identified the suspect behind the assault or a reason for the attack.
Anjum set up a GoFundMe website on Saturday and has been soliciting donations to assist Fatima and her family with the mounting costs of the incident. So far, the website has raised more than $300,000 in donations.