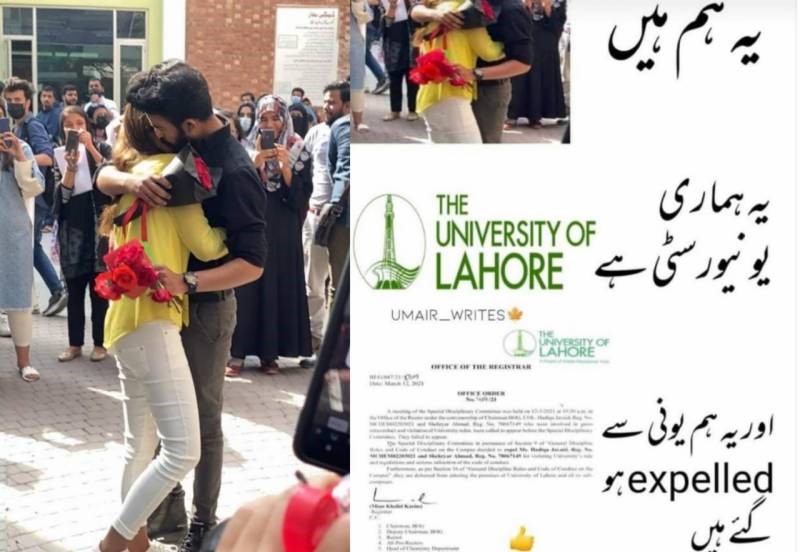 Recently, a video of a girl purposing her boyfriend on the premises of the University of Lahore went viral and the folks have different views about it. In the video, the girl went on her knee to the purpose the guy and both of them were observed sharing affection for each other by hugging in public.

After the video went viral, the administration of the University of Lahore(UOL) took strict action against the two students by expelling them from the university. The expulsion notice issued by the administration states all the rules and regulations to be followed in the university, also it claims that the couple failed to appear before a Special Disciplinary Committee.

People have so much to say about this trending topic on Twitter. In the opinion of some users, the University management needed to take action against them, since the couple was violating the local norms. Others believe that the students did not deserve to be expelled from the institution and the administration has overreacted. They argue that there was nothing inappropriate in a boy and girl showing endearment for each other in public. Some spoke up for the couple by saying that things like rape, domestic violence, and all other acts of immorality are acceptable in Pakistan but if a couple is daring enough to share their love for each other in Public, hatred is what they will have to face.

Amazed at the audacity and ignorance of ppl supporting this shamelessness! One shud b clear, angraiz bano seedhay seedhay and say we dnt need islam, wats ths bullshit of twisting the islamic right of choosing for marriage like this!#UniversityOfLahore

We just celebrated International women’s day and here we are with a top University expelling a young woman for having the confidence and empowerment to ask a man to marry her amongst the security of her peers. What kind of example are we setting here ? #CantExpelLove

You can beat, You can kill, You can abuse, You can rape but when it comes to love they say its Islamic Republic of pakistan. What is wrong in proposing someone publicly huh.#UniversityOfLahore pic.twitter.com/GSaMk0NoUR

The letter of the expulsion of the two students was issued on Friday, in which it was mentioned that the disciplinary committee considered it better to expel the students. This letter was issued after the meeting of the disciplinary committee was held on the morning of 13th of March, in the office of a Rector. The couple was expelled in the persecution of section 9 of the General Discipline and Code of Conduct on the Campus.