Home Entertainment Here is Why People Are Calling Designer Ali Xeeshan ‘A Hypocrite’ For... 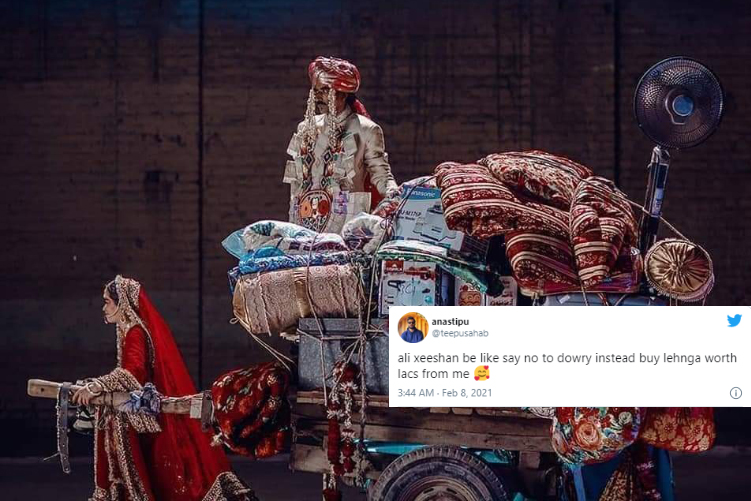 In the latest Pantene Hum Bridal Couture Week, Designer Ali Xeeshan has partnered with UN Women Pakistan to highlight the issue of dowries while unveiling the collaboration on the stage.

A young girl, laden with a cart full of goodies for dower, has been Ali Xeeshan’s not so traditional show stopper. When the girl walked the stage pulling that cart, the audience paused and thought for a while about the ugly truth of our society. It was indeed a strong message however, it has caused a bit of a stir on social media with people questioning the designer.

Though the campaign seems well-intended, many have criticized the designer for on one hand speaking up against dowry and on the other selling his dresses for a lot of money.

Many have even said that the dowry backdrop is just another aesthetic for the designer to appear unique to his exclusive clientele. While some are showing the other side of the story where dulhan has her own list of farmaishen for her husband to be.

The campaign previously included Pakistani celebrities spreading awareness about the campaign by writing ‘Jahezkhori Band Karo’ on their hands. Jahezkhori was a word UN Women coined for the campaign, combining jahez, meaning dowry, and khori, similar to bhattakhori or someone who extorts money from people.

Dowry is just one more regressive practice that is part of the toxic and extravagant wedding culture that exists in Pakistan. Larkay walay find it normal to demand from the girl’s parents an excruciating list of household items which they themselves cannot afford.