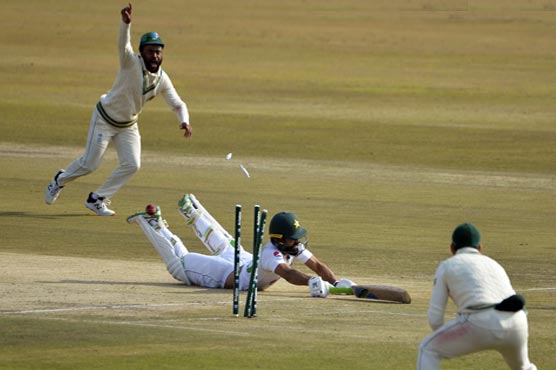 Pakistan were bowled out on 272 runs on day two of the second and final Test match against South Africa at the Rawalpindi Cricket Stadium on Friday.

The Green Caps resumed the day on 145-3 after rain had cut short day one. Babar Azam failed to add to his overnight score of 77 and was dismissed on the second ball of the morning. Fawad Alam added just three runs today to his tally of 45.

Faheem Ashraf remained the top scorer for Pakistan and smashed a brilliant 78 not out. South Africa’s fast bowler Anrich Nortje took 5-56 while Keshav Maharaj finished with 3-90.

Pakistan skipper Babar Azam had won the toss and opted to bat first. The hosts were 22-3 at one stage but Azam and Fawad Alam batted responsibly to take the score to 145 without losing any further loss. The play could not be started after the Tea break as heavy rain lashed Rawalpindi on Thursday.

The Green Caps retained their winning combination from the first Test. South Africa made one change as Wiaan Mulder replaced Lungi Ngidi. The hosts had defeated the Proteas in the first Test at the National Stadium Karachi (NSK) by 7 wickets.